Study the role and impact of Sikhism on society and culture with free online classes from Harvard. 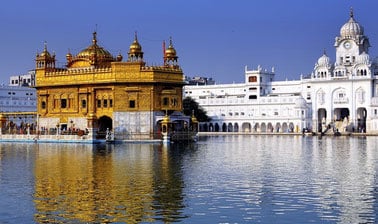 Sikhism Through Its Scriptures…

World Religions Through Their Scriptures…

Sikhism is a monotheistic religion from the Punjab region of India. It was founded by Guru Nanak, and the name means "learner" or "disciple." They are not Muslim or Hindu, but a religion all their own. Sikhs believe in a universal God common to all mankind and free of gender and constraints. The purpose of Sikhism is to meditate on the name of God and to explore the wonder of the earth in communion with all people. Sikhs are often identified by their distinctive turbans, which they use to cover uncut hair in respect to God. They follow their holy book, the Guru Granth Sahib, written by the last living Guru (Guru Gobind Singh) at the creation of the Khalsa. In this collection, he freed Indians from their caste system, instituted the five principles of Sikhism, and outlined the future of the belief system. Despite being one of the world's youngest organized religions, it's currently the fifth largest organized religion and the ninth largest overall. Its powerful set of beliefs unites followers and the curious alike.

Sikhs religion is often misidentified as Muslim, and because of that, Sikhs suffer discrimination worldwide in communities that aren't familiar with its basic tenets. The Sikh community has been part of the United States since the early 1900s, living in peace not only in American society but everywhere there's a community. Women take the last name Kaur while Sikh men adopt Singh to signify the shedding of caste and the noble equality of all humankind. The Sikh faith is growing faith and way of life. Sikh scripture outlines living in peace and transcending artificial divides of religion and culture to find the pure bliss of the one common God.

Sikhism is an integral part of many emerging markets, including Southeast Asia and Pakistan, not to mention its native India. Understanding the Sikh principles gives you an understanding of how it fits into world religions and a better footing for conducting business in a connected world. Harvard in partnership with edX.org, offers a comprehensive overview of the Sikh religion in its course, Sikhism Through Scriptures. You can learn about the acts of the tenth guru, the last living one, as well as the gurus before him. You'll understand how human beings are all connected within the religion and the five ks of the Sikh faith. You'll examine the holy scripture, both the last and the initial compiled by Guru Arjan, to understand how Sikhs view the world and each other.

Sikhism and The World

World religions offer us a chance to examine our belief systems and develop an understanding of people from different regions and walks of life. Courses in Sikhism could help you build awareness of critical concepts for areas in which you're doing business, or simply an appreciation for the wonderful complexity of the human experience.