Get an introduction to Scala with free online classes from top universities and institutions. Join today. 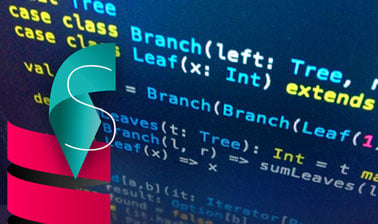 Scala Language was created to address problems with programming in Java. It's a general-purpose programming language that runs on Java Virtual Machine (JVM) and can accommodate libraries in either language. The Scala community is robust, and the language itself is just as flexible as more dynamic languages such as Python.

Java programmers often learn Scala programming because it's on the newest project or their companies have adopted it. Scala code does solve quite a few Java issues including supporting multiparadigm programming (object-oriented and functional programming) Even though Java 8 has attempted to address this, it's still a few steps behind.

It's interoperable with Java code. It offers closures like more dynamic languages (Ruby or Python for example). It's highly expressive, much more so than Java, allowing developers to build beautiful and elegant solutions. Current versions of Scala also offer case classes, and Scala documentation is getting better as more developers jump on it.

Delft offers a broad course in Functional Programming that introduces students to a variety of functional programming languages including Scala. Microsoft's Implementing Predictive Analytics with Apache Spark is an introduction to using Scala programming (or Python) to build machine learning methods for big data.

The Future of Scala

With Java libraries at your fingertips, Scala could be a more dynamic solution to coding in Java. It's a highly marketable skill with companies such as Twitter and LinkedIn migrating to it. It's intensely scalable and could soon be the enterprise solution organizations need for low latency.

Martin Odersky, the creator of Scala, is now behind a new startup, Lightbend (formerly Typesafe), intended to support Scala for commercial development. Whole initiatives have cropped up to make Scala Lightbend reactive.

It's being used in Big Data Space, and Apache Spark for big data solutions and developers working within that space have a chance to build an elegant solution that's easily maintainable. Without boilerplate, Scala can provide simple solutions where Java is overly clunky and dense.

Whether you're an experienced developer or just beginning Hello World, Scala is an elegant option that's accessible to learn and highly scalable. Case studies for Scala use are growing with organizations like Quora building entire frameworks just to switch over. The Scala-library is expanding, and it's possible to come off Java to build Scala native applications without a full switch. In other words, it's the future of Java.